Click here for a full formatted PDF of this piece including images.

We Were Strangers Once

Title: We Were Strangers Once

UNHCR, the United Nations Refugee Agency, states that there are 65.6 million displaced people, including nearly 22.5 million refugees, in the world in 2017.[1] Two years ago, Ayalon Eliach called for Jews observing Rosh Hashanah to dedicate their Unetaneh Tokef prayer to refugees,[2] to reflect on the circumstances facing those who are running for their lives and to do everything we can to save them from the awful fates described in the prayer. HIAS, the Jewish nonprofit working to protect refugees worldwide, also references this prayer in their resources for learning about refugee issues.[3] I decided to make an artist’s book as part of my response to the refugee crisis, drawing upon the language of Unetaneh Tokef for the book’s letter-press-printed text. The book consists of three separate accordion-folded pages, plus a band closure that also serves as the cover.

Refugees have been framed as humans-as-waste by academic theorists for decades.[4] Some expressions of this concept include dis-carded people,[5] disposable people,[6] wasted humans,[7] garbaged bo-dies,[8] waste populations,[9] and humans as waste.[10] I made use of these terms in designing the book’s cover image, which was hand-carved and hand-printed. Each book page features a hand-carved and hand-printed image related to that page’s text: a shipwreck, drought-cracked earth, or a child in a refugee camp. The paper used for the book pages was handmade in Minneapolis by Cave Paper. 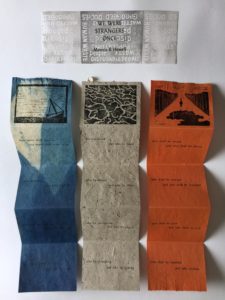 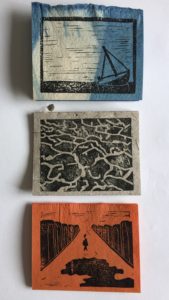 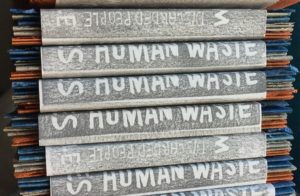 Monica R. Howell is a librarian, archivist, and book artist living in Minneapolis, MN. Her work has been exhibited at the University of Minnesota, Rosalux Gallery (Minneapolis), SooVAC (Minneapolis), and the Minnesota Center for Book Arts, among others. More of her work can be found at http://www.mnartists.org/monicarhowell.